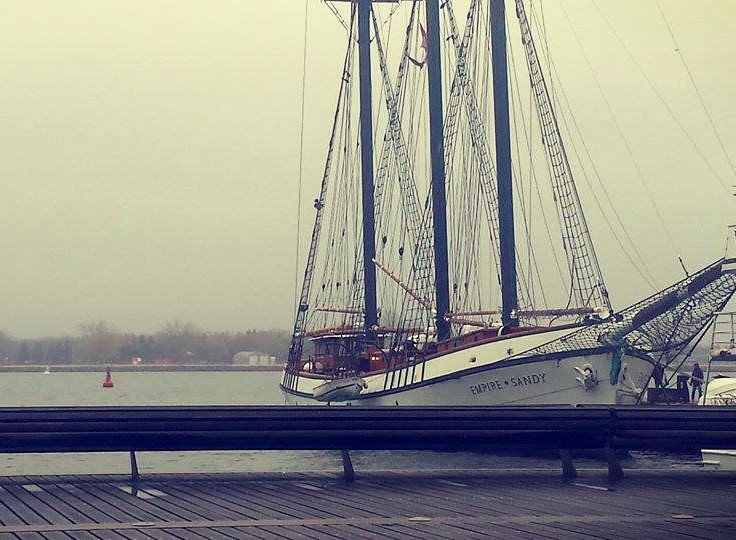 After a steamy night of salsa dancing at Lula lounge, we quickly skipped across the street to the rental car and were greeted by a perfect layer of fresh frost glistening under the moonlight like pixie dust. On any other night before this, it would have been a tad romantic reminding us of the winter we met, or a gentle reminder that winter was surely on its way, but tonight all Nic could utter was “Oh shittt…,” followed by short, nervous laughter. Stopped in his tracks eyes fixed on the car I knew he was imagining what the boat must be like right now –because so was I.

Nic, Andrew our friend and I scuttled to our seats and blasted the heat, and as my fingers thawed my mind wandered. “How many sweaters do I have? “Three.” Will I need to wear a coat inside the boat? “Maybe.” Can we run both heaters without tripping the fuse? “Tried that and nope.””

As we arrived at our pier, I immediately realized my first mistake: I should always for the next six months carry salt with me (I’m only half joking). I turned the frigid, metal handle of the pier door and slowly started placing one Blundstoned foot in front of the other, and within two steps was almost flat on my ass. Then quickly realizing that a bum bruise would be the best case scenario because if I wasn’t on my ass it would mean I had slipped into icy waters that have literally taken lives (wish I was exaggerating).

I immediately gripped onto a handful of Nic’s well-worn leather jacket and clutched tightly. Our feet glided in a single file along the rest of the pier, then to our finger dock, then our glorified igloo – all the while wondering why the heck there isn’t a fence all along the pier death trap.

As expected our 28-ft home had been covered with a frosty layer of ice, but there was no time to stand around and think about it. It was freaking cold.

We hopped aboard and made our way into the cabin and checked to see if the oil heater had been on and sure enough it was. It wasn’t going to be enough. We turned on our heated mattress and switched to our directional heater which always works faster to heat us up but isn’t safe to leave plugged in. Within a half-hour, we were fairly toasty. We can totally do this winter thing I thought.

A few moments later, as I was just ready to crawl under the blankets feeling like a champ, we smelled something burning. That distinct smell of melting plastic that permeates the air and stays there. We started sniffing around our noses in the air like bloodhounds because whatever it was we needed to find it instantly. Other than the fear of our boat sinking while we’re sleeping (me always) the actual most common cause of accident or injuries for those who liveaboard in the winter are electrical problems.

“Fuck.” It was the second heater, the one that just saved us. I had knocked it over, it had fallen onto the carpet below our bed nook and it was broken due to overheating. There’s literally no room for clumsiness — people, literally. We were now down to one sucky heater thanks to me.

I was thankful we had at least averted a possible electrical disaster but knew now it was certainly going to be a chilly one. So what do you do when the only warm place in your entire boat is your heated bed? Early night of course (wink wink). 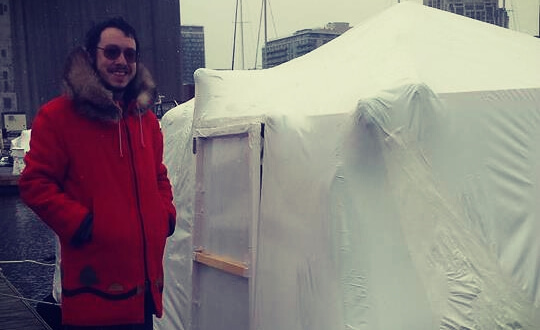 Nic standing next to our boat which has been wrapped for insulation for the winter. Toronto 2016.